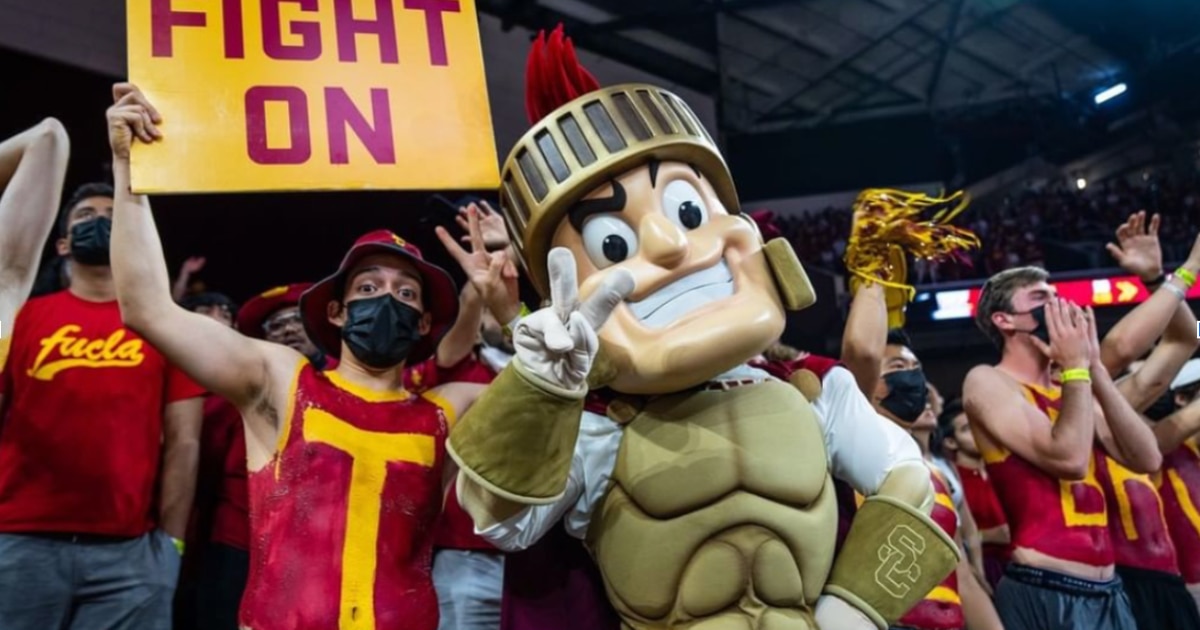 You go to a USC basketball game, and you expect to see the usual suspects. There are the players on the court, the Spirit Team with their megaphones, the Song Girls and Dance Force with their pom-poms, and one very muscular trojan with incredible dance moves. That’s my good friend Tommy. He’s kind of a beast.

I have spent the past four years as Tommy Trojan’s best friend. Over the years, we have become inseparable, almost to the point where I feel as though he is a part of me, and vice versa.

Tommy and I have shared many special moments together. We stormed the court after beating UCLA this past season, we traveled together to Vegas quite a few times and we danced the night away on multiple occasions.

However, what I will cherish most about Tommy is not the great experiences (though there were many) or his chiseled abs (though again there were many). What I will cherish most are the life lessons he taught me and the wisdom he shared with me. I decided to share these lessons with you, because as Trojans, we all embody Tommy’s spirit from him, and I think he would want me to put his 12 Rules for Life in writing.

So without further ado, here they are.

Rule 1: If The Fur Ain’t Flying, You Ain’t Trying

It is a great truth of the mascot community: If the fur ain’t flying, you ain’t trying. Some of the greatest joys in life come from our greatest exertion.

Tommy taught me this lesson time and time again. Tommy could dance for hours on end, and it was often hot and sweaty work. There were times when Tommy had to catch his breath (apparently it’s hard to breathe under all that armor), but he would quickly get back out there to hype up the crowds.

And the crazy thing is he never stopped smiling.

Tommy loved what he did, and he didn’t mind working hard to pursue his dreams. It was n’t always glamorous, and he was often ridiculed for his four fingers and four toes. But he loved it, so he was willing to put in the hard work without caring what others thought.

Rule 2: Learn to Not Give a Duck

Tommy would often talk about his adventures with the other Pac-12 mascots. Apparently Sparky was a little devil, the Tree was a bit shady, and Wilbur the Wildcat was, well, wild.

But the mascot Tommy looked up to most was the Duck. Because the Duck simply did not give a duck.

The Duck was not afraid to ruffle a few feathers, and he did what he did because he wanted to do it. He didn’t care whether or not anyone supported him; if he wanted to run headlong into a goalpost, he just did it.

Life’s too short to not do what you enjoy. Especially if you’re a duck.

Understanding which lines not to cross is incredibly important.

Tommy would often tell me about hecklers in the stands and how he would choose either to ignore them or respond in a friendly way. Tommy knew that he represented something bigger than himself and that a confrontational response was never the right answer.

Don’t get me wrong: Tommy had a lot of fun interacting with his fans. He would tease them and playfully taunt them, but there was always a line he would not cross if things threatened toward a conflict of any sort.

Tommy was able to keep the bigger picture in mind, and he never lost his cool even under the hottest conditions.

Life doesn’t always go the way we hope it will. Sometimes you forget your cape, you completely lose visibility or you tear your left pectoral muscle (Tommy goes hard at the gym).

But the important thing is to not lose your head.

There were multiple times Tommy almost lost his head. But in the end, he knew the show must go on, and he learned to improvise with what he had. He never let the little things slow him down from entertaining his fans of him. He just took a deep breath and kept on dancing.

Rule 5: Dance Like Nobody’s Watching (Because They Probably Aren’t)

Even though Tommy was the most attractive person on the court, he knew he was never the main attraction. And that’s OK.

Tommy knew that his performance should never detract from the fan experience, and he understood his place. He has never upstaged anyone or attempted to draw attention away from others. He knew others were not there to watch him.

But that was fine by him. Because I loved to dance.

Tommy understood when to seek the spotlight and when to step aside. I have embraced his role as a team player, and I have understood the importance of humility in creating a positive fan experience.

Rule 6: Don’t Miss the Trees for the Forest

Tommy understood the power of personal interaction. Even when performing in front of thousands of fans, Tommy always made an effort to give a personal touch to his performances.

Whether he was handing out high-fives (or rather, high-fours), taking pictures with fans or striking up conversations with event staff, Tommy never lost sight of the individuals. He knew that those interactions were often the most memorable and meaningful.

Especially in an age with so many casual acquaintances, it’s important to maintain one-on-one relationships, as those are often the most impactful. Though Tommy loved to play to the crowd, he particularly enjoyed entertaining individuals.

Rule 7: Harness the Power of Silence

Tommy was a trojan of few words. Actually, he never said anything. But his silence from him spoke volumes.

Tommy showed me that actions speak far louder than words. Embracing silence and being quick to listen to others is an important part of life. Tommy was incredibly observant, and his silence from him allowed him to connect powerfully with others in a way that went beyond words.

By connecting with others nonverbally, Tommy showed me that human interaction goes far beyond the things we say. It encompasses our gestures, posture and, most importantly, the attitude we bring.

We can learn from Tommy to connect with anyone, regardless of our differences or any barriers to communication, simply by bringing a positive attitude that seeks to listen and understand others.

Rule 8: Keep Your Confidence (And Others’)

So much of what Tommy taught comes down to confidence.

Tommy was often thrown into situations that initially seemed intimidating. However, over time he taught me to have confidence with or without his armor from him. It is amazing what self-confidence can achieve.

Tommy understood the importance of maintaining others’ confidence, and he refused to betray their trust. We can overflow with confidence when we embrace ourselves and trust others enough to be real with them.

Rule 9: Take Off Your (Proverbial) Mask Around Friends

Among friends, Tommy would take off his mask. He would be vulnerable with those he trusted and was unafraid to show his inner self.

So often we wear masks to cover our insecurities. But among friends, we ought to be willing to take our masks off and show others who we really are. This is the only way to achieve true, lasting, friendship.

Rule 10: Real Heroes Don’t Wear Capes (But Some Do)

Being a hero is not about wearing a costume. It’s about making a difference in the lives of others and in your community.

Tommy embodied this notion because he knew that his power to help others didn’t come from his superhero-like qualities. Rather, it came from a desire to help. Tommy frequently used his position to make the world a better place, visiting schools and volunteering to benefit others.

Though most of us don’t wear capes, being a true hero is about having a mindset directed toward helping others.

Even when you can see no more than a few feet in front of you, it’s important to maintain your vision.

Tommy taught me to have goals and pursue them even when the path ahead is obscured. Tommy would take one step at a time, and though he often couldn’t see where he was going, he knew where he was headed.

Very rarely is the path ahead totally visible. Our vision can sometimes be blurred, and it can be tempting to give up or feel hopeless.

But Tommy taught me to just keep taking big old Tommy steps and maintain a vision, appreciating where we’ve been and looking ahead to the future, even when it lies just out of sight. And even if you end up totally lost and wandering aimlessly through the tunnels of Allegiant Stadium, at least you had one heck of an adventure.

Every time Tommy held up those two fingers in victory, he reminded me to live for a purpose greater than myself. He has reminded me that every day he presents his own battles and that we can prevail when we remember our priorities and our purpose.

As I now prepare to say goodbye to Tommy, I am so grateful for what he has taught me over the past four years. It was an absolute joy and blessing to be his best friend, and it was a pleasure to entertain you, the students, with him.

And as always, Fight On!