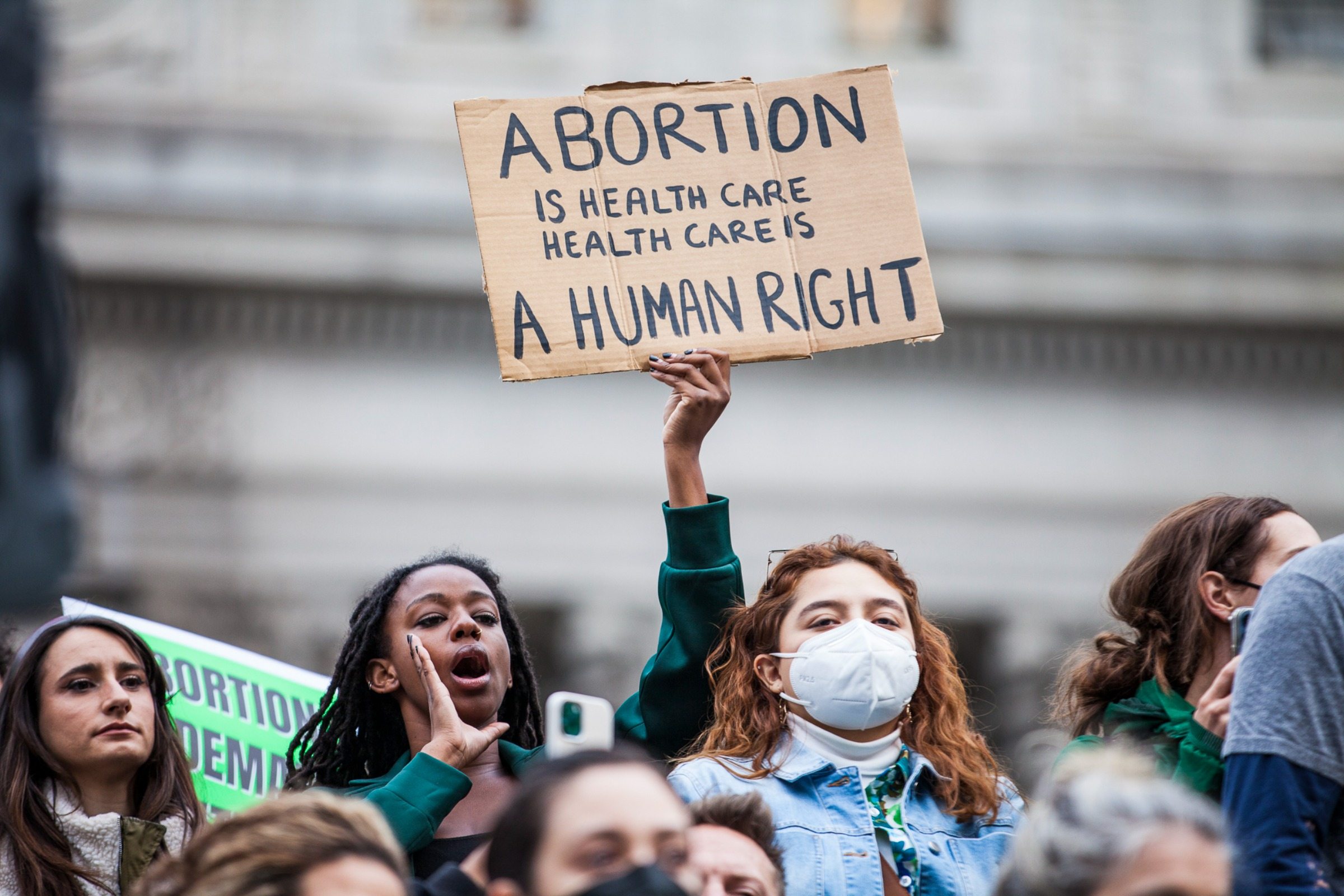 On Tuesday night, May 3, around 5,000 people gathered in Foley Square in Manhattan’s Civic Center to protest for the right to abortion in the United States. Photographer Kisha Bari, who previously documented the 2017 Women’s March and 2018 protests against Brett Kavanaugh’s nomination to the Supreme Court, captured the impactful demonstration.

Many of the protesters wore scarves, hats, and other garments in the color green, which has come to symbolize the pro-choice movement. In the last few years, the “green wave” has swept Latin America, achieving abortion rights wins in Argentina, Mexico, and Colombia. Protesters chanted “bans off my body,” a phrase that originated in Texas when the state limited abortion access after six weeks of pregnancy late last summer.

The Foley Square protest was organized by Sasha Ahuja, an activist and adjunct professor of Social Work at Columbia University, in conjunction with leaders in the reproductive justice, health, and labor fields. Demonstrations also took place at Washington Square Park and Barclays Center, with over 10,000 people turning out across the three locations, Ahuja told Hyperallergic, and even more throughout the nation.

“Now more than ever, and especially I think in response to a leaked decision, we need to demonstrate here in New York and across the country that people are outraged, that this potential decision from the Supreme Court is vastly out of touch with the news and with the majority of Americans who want to ensure that abortion is legal and safe for the people who need it,” Ahuja told Hyperallergic in an interview.

Bari said the protest showed elected officials and the world that “people will not sit down quietly” while their reproductive freedoms are taken from them.

“Public protest allows us to rally and find solidarity with one another when we’re all angry and hurting,” Bari said. “There is a lot of value in coming together and firing each other up for the fight ahead. It gives us all steam to carry on.”

Dinetta Gilmore, a resident of Brooklyn’s Bedstuy neighborhood who was handing out buttons that read “Bans off my uterus,” told Gothamist that the ban would primarily impact communities already marginalized and disenfranchised.

The protest had eight speakers, including leaders on labor and immigration policy and gender equity and reproductive health as well as New York State Attorney General Letitia James and Joy D. Calloway, interim CEO of Planned Parenthood in New York.

“The importance of mass mobilization, of public outrage, is so folks know we are watching — this cannot happen on our watch. And more importantly, if people need care, and when people need care, they can always come to our state no matter what,” Ahuja said. “This state has to be an access state — that is our job.”

In early 2019, New York passed a law ensuring the right to abortion. In light of the leaked Supreme Court opinion, a new bill in the New York State Senate would prevent New York law enforcement from working with officials from other states to prosecute doctors and out-of-state abortion patients.

Ahuja and other organizers are planning another demonstration on May 14, when protests are set to be held across the country. The New York City location has yet to be determined.