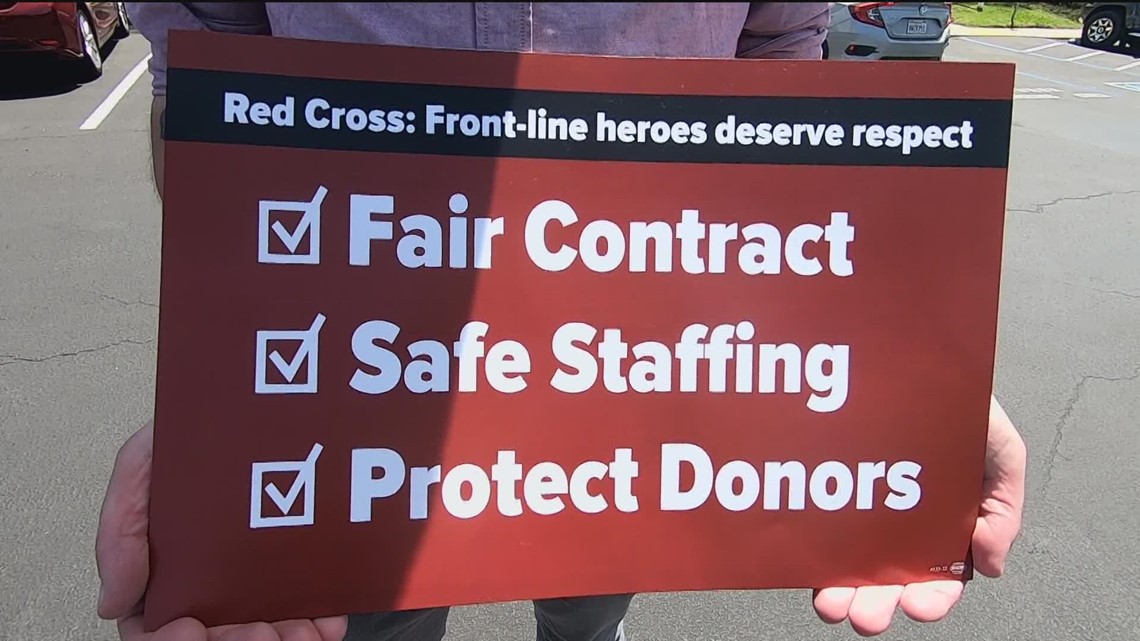 “Because of the low wages, more and more staff are leaving Red Cross,” said Richard Feria, with SEIU, Local 221.

SAN DIEGO — Red Cross workers in San Diego and across the country held Monday rallies to protest what they’re calling unfair work conditions, including low pay. Some workers say the organization is not only losing employees, but they can’t retain them.

“We work hard. We provide an invaluable service and it’s time the Red Cross respects that with not just words but with action,” said Robert Feria, with SEIU, Local 221.

Monday’s rally outside the Red Cross Donor Center in Kearny Mesa comes as both sides have been trying to negotiate for months.

The number one concern for San Diego workers? They’re not being paid as much as those in different areas.

“I was told that this job paid $3 more than I’m currently getting paid an hour, and that’s how much they offer in Los Angeles and it seems kinda odd that because of where I live, I’m getting the short end of the stick,” said new hire, Joshua Wilder.

The employees who rally represent those who help with community blood drives. They claim to be getting paid between $18 and $19.50 an hour-an increase compared to what it was before the pandemic, but still not enough.

“Cost of living going up. We have inflation of over 8% in March and it’s just not sustainable,” said Feria.

As a result, SEIU Local 221, which represents the employees, says people are quitting to go elsewhere, causing a staffing shortage, which may ultimately impact how much blood they’re able to collect.

The union says veteran workers have left as well because they’re being paid the same as new hires.

“People who have dedicated their lives to Red Cross, who have spent years if not decades with Red Cross, are still making the same wages as someone basically walking in the door,” said Feria.

The union declined to give specifics but said it’s asking for wages that increase year to year. In addition, they also want the healthcare plan to remain the same as opposed to a new one that may wind up costing employees more.

In a statement, a spokesperson for the Red Cross said:

“The American Red Cross has been in negotiations with its union members for the past several months to discuss wages, health care and other issues, and is working to reach the best possible agreement for both our organization, our valued employees, and the patients we serve. The Red Cross has a longstanding history of working together with our labor partners to solve complex problems, and remains committed to negotiating in good faith to reach the best outcome for all parties. Our current contract extension with the Coalition of Red Cross Unions expires May 31.

We recognize that informational picketing, rallies, media outreach, and other activities take place as part of the bargaining process – especially leading up to the end of a contract. The Red Cross respects the rights of our employees to engage in legally protected activity.

The Red Cross greatly values ​​its employees whose compassion and hard work help those in need each day. We remain committed to providing our Red Cross employees across the country with competitive wages, benefits and working conditions, including health care. To this end, we have presented mutually beneficial proposals, and provided opportunities to increase wages and ensure quality affordable health care benefits. We continue to negotiate with the attempt to reach a fair and amicable agreement.

At the same time, the Red Cross will continue to focus on delivering our mission for patients across the country who rely on us each day to provide lifesaving blood; While we experienced a national blood shortage just a couple of months ago, we currently have a sufficient supply of blood on the shelves to support patients in need.”