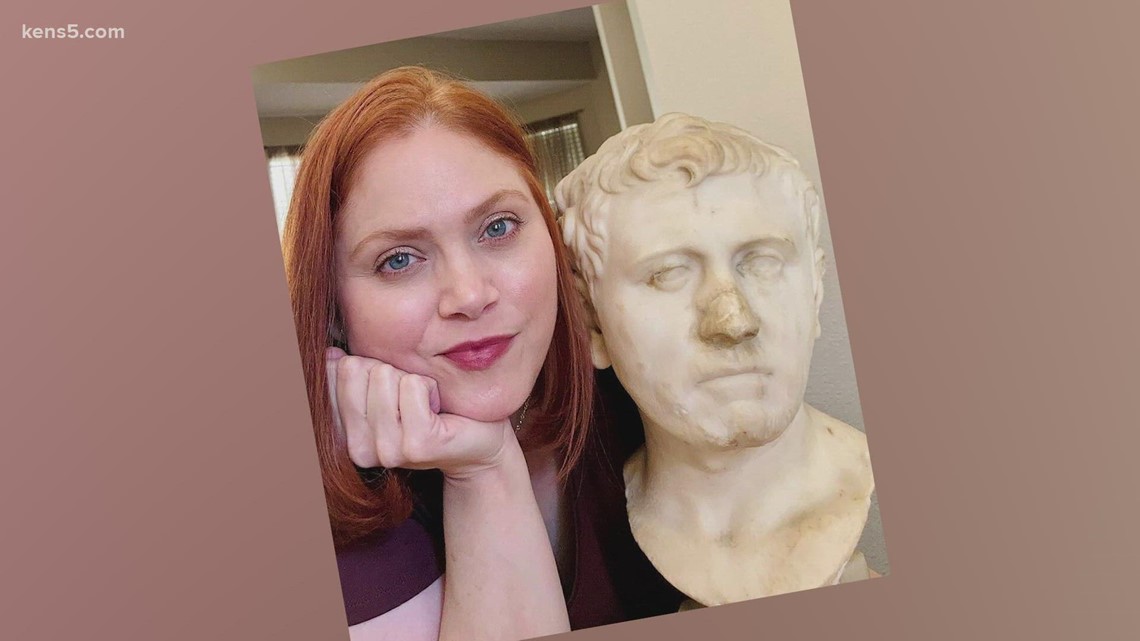 “It obviously has a long and very complicated history,” says Lynley McAlpine, a curatorial fellow with SAMA.

SAN ANTONIO – For four years, Laura Young could not discuss the ancient relic that sat in her home. It was best not to advertise the priceless bust in the entry hall, she says.

“We had a water heater replaced and we put a drape over the head in the living room. No one can see it,” she chuckled.

The Youngs clued in a select group of friends and family after they discovered her $ 34.99 Goodwill find was actually a 2,000-year-old Roman portrait.

Today, it seems the whole world is aware of her discovery.

“I’m glad I get to talk about it finally,” she said.

In recent days, she’s conducted interviews with media outlets across the globe. She admits the attention has been “a lot” to handle.

Her story has already appeared in The New York Times, People Magazine, and on the BBC.

It’s a viral tale that begins in Austin, Texas.

Young, an antique dealer, says she goes to Goodwill for “business and pleasure.” She looks for items she could resell, though she does not buy trinkets she would not display in her own home.

On August 13, 2018, she found a sculpted head on the thrift store’s floor. A worker helped her buckle the 52-pound marble portrait into her car’s seat.

Young says she initially believed the bust might’ve been a replica, 300 or 400 years old. But she compared pictures of ancient Roman art to her purchase and decided to call auction houses.

Soon, she learned an American soldier likely looted her ancient art piece from a German museum after World War II. Auctioneers would not touch the sculpture without a clear ownership record.

Reselling it would’ve been amoral anyway, she said. Instead, the bust sat in Young’s living room while she consulted attorneys and museum curators for advice.

In the meantime, she named the portrait “Dennis.” Young, an “It’s Always Sunny in Philadelphia” fan, says the statue reminds her of the television show’s character, Dennis Reynolds.

“He became a presence,” she said. “It’s a real human face, almost like a ghost … You see his reflection in the TV. He’s the first person you see when you walk in the house.”

“He’s this kind of outlaw figure,” said Lynley McAlpine, self-described “nerdy detective” and curatorial fellow at the San Antonio Museum of Art. “He had his own private navy, so he was called a pirate by his enemies.”

McAlpine says Sextus’ father was an ally to Julius Caesar. Their relationship soured and the elder Pompey spent his life trying to assassinate Caesar.

Roman soldiers captured and executed him.

“After that, his son (Sextus) kind of took up the mantle and fought hard against Julius Caesar,” McAlpine said. “Then Julius Caesar was assassinated and Sextus fought against the successors of Caesar: Marc Antony and Octavian.”

It’s unusual, she says, to find a sculpture of a state enemy. She believes the head was once attached to a marble body.

It’s not clear how Dennis survived the Roman Empire’s fall. The first records of the portrait’s existence indicate his presence in a 19th-century royal collection.

King Ludwig I of Bavaria, known for his art affinity, constructed a sort of Roman villa at the Pompeiianum in Aschaffenburg, Germany.

During World War II, someone moved the statue into storage. There, it survived allied bombs that destroyed the Pompeiianum.

“In 1950, someone is in the storage facility and notices the bust is not there,” McAlpine said. “Since it ended up in Texas, the most likely explanation is that an American stationed at the site got their hands on it somehow and brought it back to the US”

It’s not clear who donated the statue to the Austin Goodwill or how long it stayed there.

She agreed to hand over the statue to the San Antonio Museum of Art, which already boasts a large Roman antiquities collection. It went on display this week.

She admits she’s disappointed she can’t sell or keep the bust, but says she’s satisfied with the 3-D printed replica of Dennis her husband commissioned.

“It was just amazing to see other people finally see him,” she said.

Dennis will stay with the San Antonio Museum of Art for a year. Then, the portrait will return to the Pompeiianum in Germany.

McAlpine says it’s important for stolen art to return to its rightful owners, noting that wartime looting is a continuing problem.