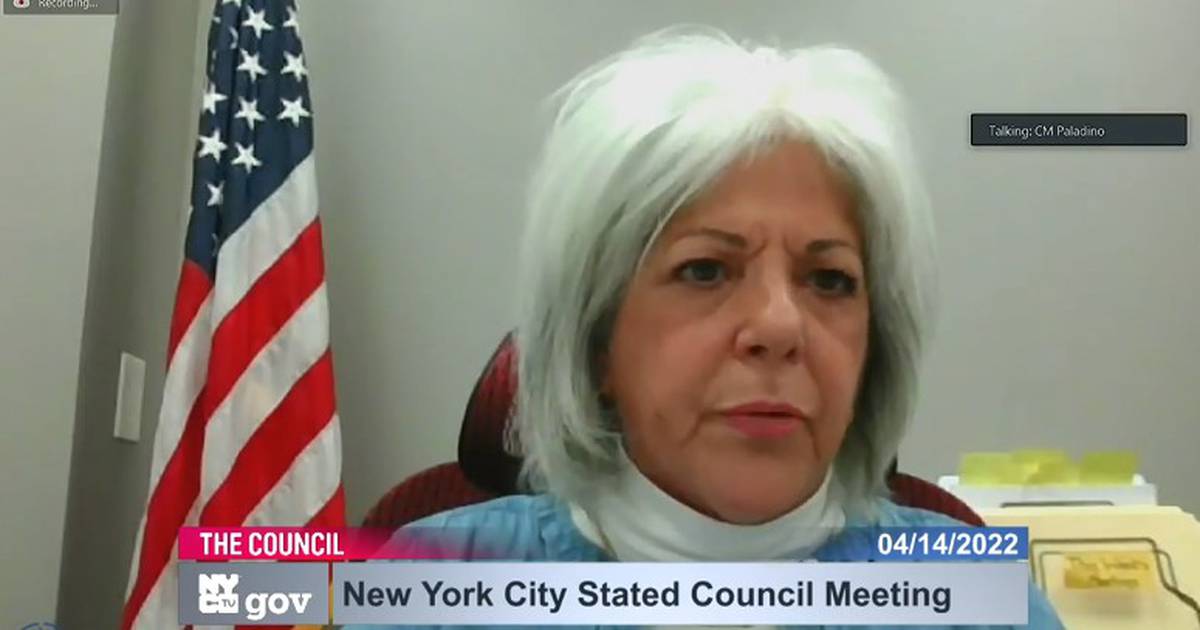 A Republican City Councilwoman who claimed last week that progressive rivals hurled objects at her video image during a partially remote hearing is now coming under fire for misrepresenting the episode.

Queens Councilwoman Vickie Paladino wrote in a tweet posted Friday that while she was speaking remotely during an April 14 hearing, colleagues who were physically at the City Hall meeting “threw objects at the screens” that were displaying her image inside the City Council chambers.

“As I spoke in support of law enforcement shortly after the subway mass shooting, many of my progressive council colleagues threw objects at the screens on the Council floor,” Paladino, who represents Flushing, Bayside and Douglaston, said. “It was pretty disgraceful.”

As shocking as such a departure from decorum might seem, several Council members and staffers in the chambers at the time of the alleged incident say it simply never happened and her retelling of it more closely aligns to a version of “The Boy Who Cried Wolf. ”

“Obviously, this is a bald-faced lie,” said Councilwoman Crystal Hudson (D-Brooklyn), who was present in the Council chambers when Paladino spoke.

Several other Council members and staffers who were present backed up Hudson’s account and gave various depictions taking largely the same perspective.

“Never happened,” said one Council member, who asked not to be named. “Council member Paladino is entitled to her opinion of her, but not her own version of the truth.”

Two Council members said colleagues could be heard groaning during Paladino’s remarks, but that there were no flying objects.

“I do not recall anyone throwing anything at the screen,” Councilwoman Sandy Nurse (D-Brooklyn) said.

A Council staffer who asked to remain anonymous said that the alleged incident “literally did not happen.”

“It is puzzling to see why there is a need to fabricate something that can be easily debunked by Council members and staffers who were at the stated meeting,” the staffer said. “I don’t understand why there is a compulsive need for certain Council members to be a perpetual victim, even at the point of blatantly lying.”

The hearing in question took place on April 14, two days after a gunman shot up a Manhattan-bound N train, wounding 16. Frank James, 62, was eventually arrested for the shooting after eluding a police manhunt for more than 24 hours.

Video of the meeting depicts Palladino speaking remotely via video feed and chiding her fellow Council members for not doing enough to back the NYPD.

“I hope to God that everybody can understand that violence is here. It’s not going anywhere,” said Palladino, taking a strident tone. “Social workers are not the end-all. We need a combination of both. Be wise, people, when you think, and think before you speak.”

The video of the Council hearing doesn’t show images of the chamber while Palladino was speaking, only a shot of the room after she’s finished. The video also does not include footage of Council members or staffers throwing anything at the screen.

Paladino’s chief of staff, Nicole Kiprilov, conceded that her boss didn’t actually witness anyone throwing anything.

“When she was giving the statement, the [Council member] was giving it via zoom and was not on the floor to witness the reactions to her statement,” Kiprilov wrote in a text. “However, after the stated meeting of her, she received several phone calls from her colleagues of her who were on the floor and told her what happened because they themselves witnessed it.”

When asked to name the colleagues who witnessed the alleged projectiles, Kiprilov declined to name any, except for one, Councilman David Carr.

Paladino also told the Daily News that it was Carr who told her that “a pen was thrown.”

But Carr (R-Staten Island) said Monday that he doesn’t recall saying that in his conversation with her.

“I don’t remember saying that at all. No,” he said.

Carr did say that he told Paladino that he thought their colleagues disrespected her for speaking out of turn during her remarks, though.

“It’s important that we all have decorum,” he said.