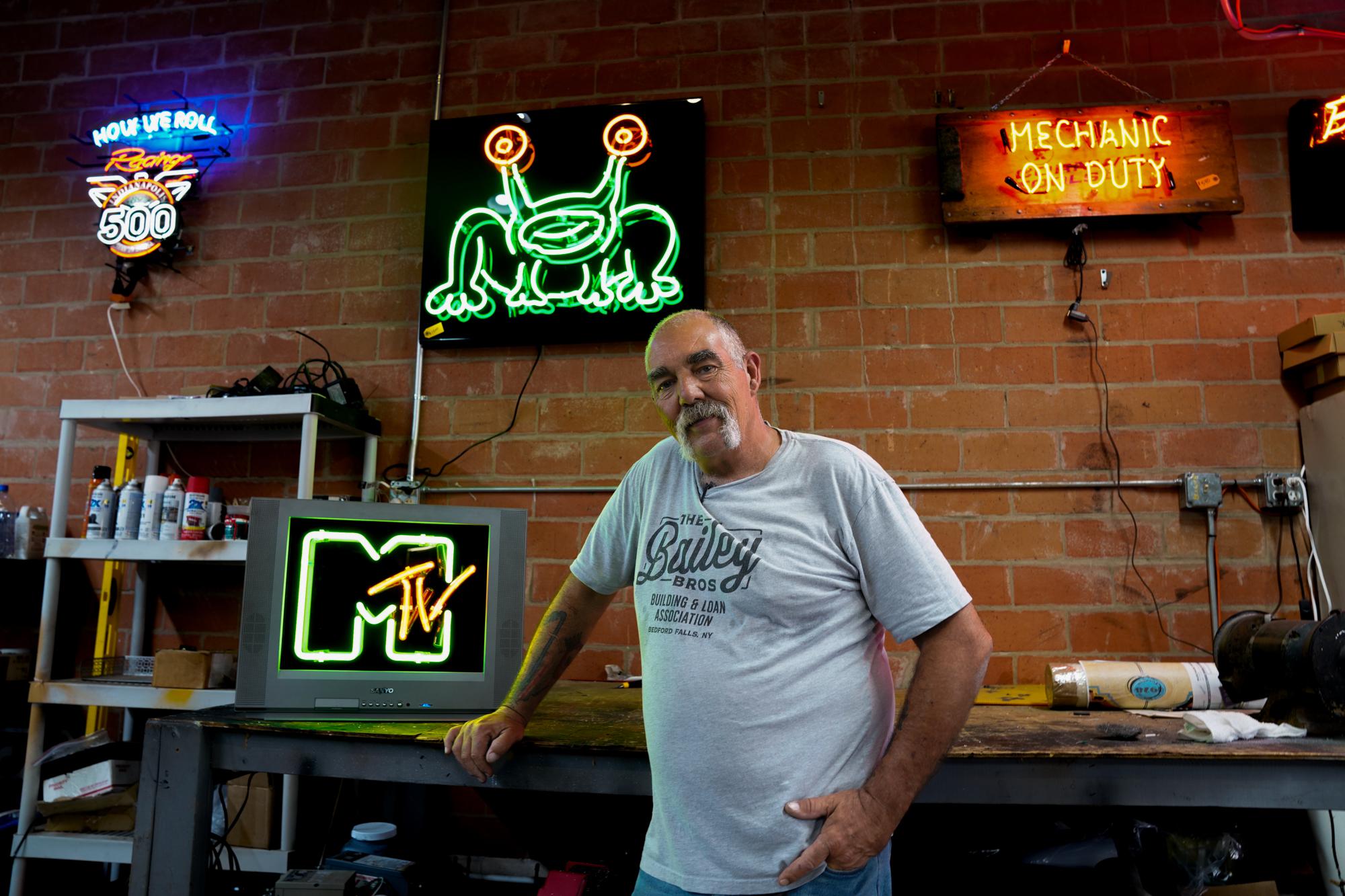 Drivers waiting for the light at Stone Oak Parkway and Knights Cross Drive are likely to notice the cheeky, all-white neon sign reading “I’ve Been Drinking About You” that overlooks the outdoor patio at Pan & Coffee bakery and coffee shop.

Popping out of a background of green vines, the sign has been drawing customers ever since the family-run shop opened 14 months ago.

“We put it up for the young people,” said co-owner Laura Lawitz. “Everybody goes out to the patio to take pictures with it.”

Neon signs have been around for more than a century, and their popularity peaked from the 1920s to the 1950s. But after a period of decline, when vintage signs became collectibles and cities passed regulations to preserve historic examples of the art, neon signs are popular again.

In an age where so much of social media is devoted to food photos and selfies, bar and restaurant owners started installing eye-catching neon backdrops to encourage more photos – and the free advertising for their businesses that comes with them. The strategy has trickled down to other businesses, everything from physicians’ offices and day spas.

Neon’s new popularity has meant a big boom in business for the few San Antonio sign shops that still craft these intricate amalgamations of glass tubing, electrical wiring and neon and argon gas.

At Affordable Neon, located just south of the Alamodome on the near East Side, owner Ray Lynch says the last few years have been his busiest ever, with a 200 percent increase in sales, as businesses took advantage of pandemic-induced shutdowns to remodel and add new decorations.

“It was wild the amount of work people did on their places,” he said.

Lynch said that for years, he had been making mostly utilitarian signs along the lines of “open” and “closed.” Now the signs he’s crafting are more artistic and creative, designed to draw attention stand out on social media.

“We’re doing signs that add to the atmosphere of a place,” he said. “Signs with pithy sayings, in different colors.”

Making neon signs is as much as art as it is a craft. It involves heating glass tubing over an open flame until it becomes pliable enough to bend and shape, creating words, statements (“Feed me tacos and tell me I’m pretty”), logos and images such as lips, lightning bolts and flamingos.

In recent years, neon has been challenged by LED neon lights, also called faux neon. These use strings of colored LEDs in acrylic tubes to mimic neon signage.

Faux neon is more energy efficient and costs about half the price, according to Mikal Harn, chief executive officer for Comet Signs, which has five sign manufacturing locations in Texas. It also is programmable, so the signs can change colors, dim, strobe and more.

“The traditional neon signs are very labor intensive, especially compared to using LEDs,” he said. “But some people just like the old school neon better.”

A fire in 2019 at Rod Dog’s Saloon near Nacogdoches Road and Loop 410 destroyed a wall of custom neon signs representing each branch of the military. It took two years to restore the friendly neighborhood dive, but when Rod Dog’s reopened in May 2021, the centerpiece was a bright red neon sign with the bar’s old logo and an image of a sorrowful hound dog.

On ExpressNews.com: San Antonio bars getting boosts from selfie-friendly backdrops and skyline views for Instagram

“My general contractor gave it to me as a thank-you gift,” owner Zentralsta Kelley said. “He knows I love old-school neon because it’s like bright lights, big city and better than any LED lights.”

But bars and restaurants aren’t the only establishments that have turned to neon to add a little pizzazz to their surroundings.

Plastic surgeon Michael Baumholtz commissioned a neon sign reading “Live Love Botox Repeat” for one of the injection treatment rooms in his De Zavala Road office. The sign also has a white hypodermic needle with animated drops of what’s presumably Botox dripping from the tip.

Baumholtz had the custom sign made a few years ago when Chip and Joanna’s “Live Love Laugh” shabby-chic aesthetic was all the rage. Baumholtz, who declined to reveal how much he paid for the sign, said only that it cost about as much as an original piece of artwork.

“We did it to make patients smile and distract them during their procedure,” he said. And should someone take a selfie and tag his practice? Well, it’s worth a shot.