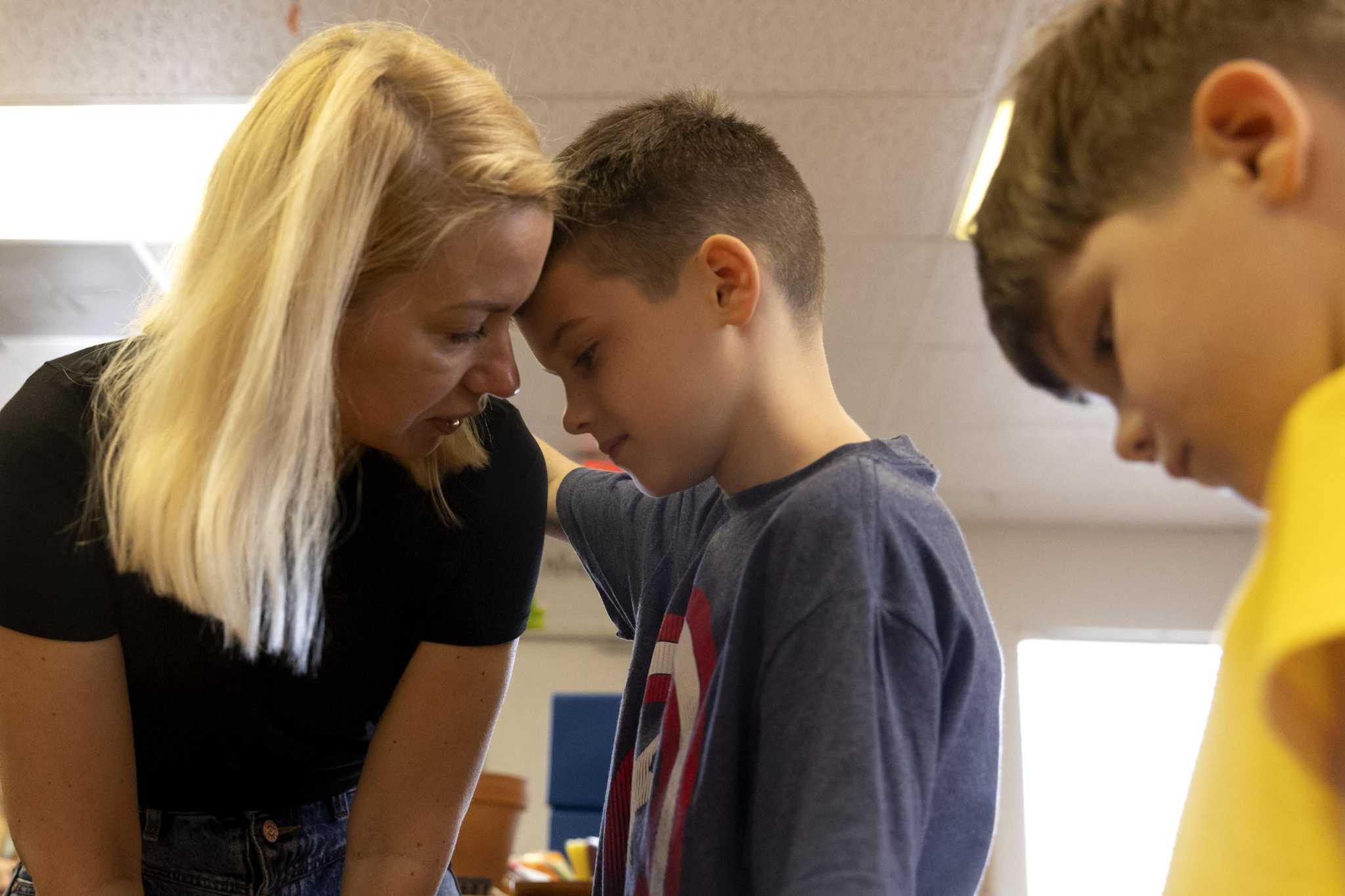 The first day of school is always stressful. But for brothers Alex and Max Kovalskyi, ages 8 and 6 respectively, their first day at Child Montessori School must have been especially hard.

It had been only about 48 hours since the boys and their mother, Olga Kozhukhovska, had flown into San Antonio after living in Poland for two months. All three, along with step siblings, Alexandra “Sasha” Kovalska, 15, and her brother Bazhen Kovalskyi, 12, had been forced to flee their home in the Ukrainian capital of Kyiv after the Russian army invaded on Feb. 24.

The boys entered the classroom on Thursday warily. Both speak only Ukrainian but, fortunately, two students in the class speak Russian. The languages ​​are different, but by using the words they did know, mixed with the universal language of pointing and mimicking, the children were able to communicate well enough for Alex and Max to work through some rudimentary lessons and visit the backyard vegetable garden, where Alex watered the plants.

Safe in San Antonio, the boys and their mother are living in their aunt and uncle’s Stone Oak home, where the three share what their uncle, Dymytro Kavalskyy, slyly calls the Temple of Knowledge – a former library he has turned into a bedroom.

They join Sasha and Bazhen, who were able to come to San Antonio about a month earlier than they did because their visas were approved first.

“The boys are more excited to be here than me,” Kozhukhovska said. “They were wondering why Sasha and Bazhen got to go to the United States and they had to stay behind.”

When the five of them left their home in Kyiv, all they had were the few belongings their mother had the foresight to put into to-go bags.

“It was like intuition,” she said, shortly after saying goodbye to the boys at their new school. “No one thought the Russians would attack, but I just felt I had to put our things in one place.”

Initially, Kyiv was a major target of the Russian forces, and soon they could hear explosions nearby. Kozhukhovska said she would look out of the roof window in their apartment to see if any rockets were flying overhead.

“I was having panic attacks,” she said.

After spending several nights in the basement of their apartment building, she realized they could not stay in Kyiv.

On ExpressNews.com: Interview: The family drive out of besieged Mariupol was lined with bodies

“Before, my husband had told me we should leave, but I said no, I can never leave my home,” she said. “We love it so much there. We bought it just two years ago and we had a great life. And I had to leave all my stuff, all my lovely things and take the kids to safety. ”

Her husband, who serves in the Ukrainian militia, stayed behind.

The situation in Kyiv was hectic, Kozhukhovska said, and they were fortunate to be able to escape.

First, they found the only bridge still open across the Dnipro River to get to the train station. Once there, the crowds were so thick, she did not think they’d all be able to get on a train. Then, someone stepped forward to help them through the throng and into a compartment. Once they settled in, everyone in the crowded compartment shared what food they had and allowed the children to lie down to sleep.

Somehow, she did not lose her sense of humor. When volunteers in Poland gave them blankets to ward off the cold, Max joked, “Mom, look I’m Superman.”

Eventually they made their way to a small town outside of Warsaw where they were given an apartment rent-free, paying only for utilities, internet and the like.

“So many people helped us,” she said, her eyes welling. “So many kind people.”

Kozhukhovska was fortunate that she was able to keep her job distributing Ukrainian TV programming internationally, even while in Poland. Soon, their days settled into a rhythm. In the mornings she worked while the children did their schoolwork. In the afternoon they went to the park or a nearby playground.

Eventually, Kozhukhovska’s mother was able to join them to help out.

All the while, she was online trying to get the paperwork in order to fly to the United States.

“It was like this,” she said, holding her thumb and forefinger about an inch apart.

Once in the United States, they’ve received additional support. The Montessori school is letting the boys attend the last two weeks of the school year for free. And a friend who owns a furniture store has donated beds for the family. They’ve also set up a Gofundme page to help defray her brother-and sister-in-law’s added expenses, now that they suddenly have five more people living with them.

As for the future, she said they’re looking ahead only as far as the end of summer.

“Once the new school year begins, we have to go back.”

“We believe that by fall, active fighting will be finished,” she said. “No one knows, but that’s the plan; that’s the wish. ”