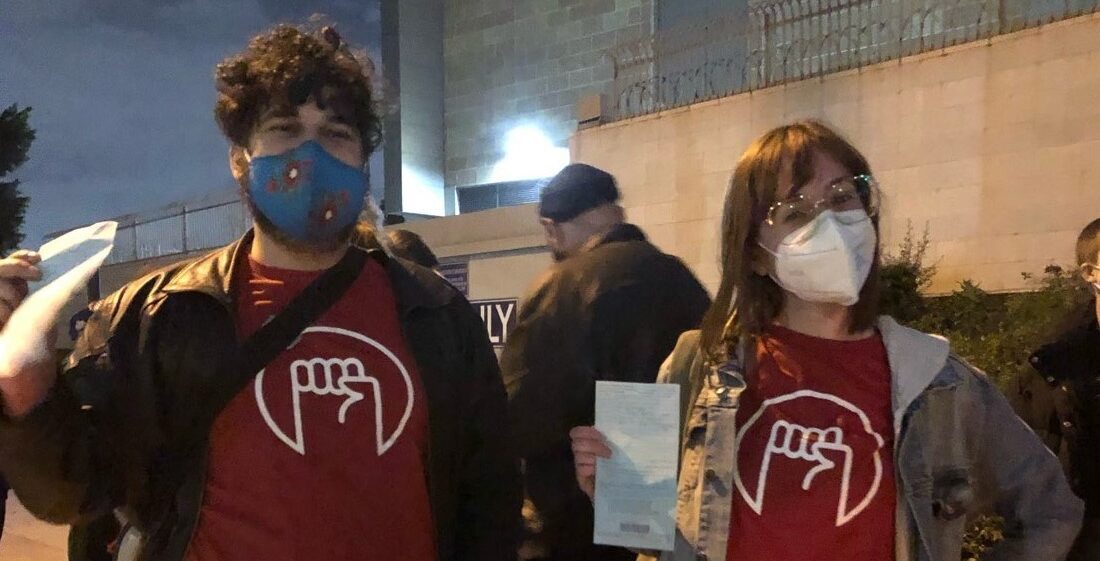 Today, Knock LA‘s own journalists Jon Peltz and Kate Gallagher have filed suit against the City of LA and the LAPD for their detainment and arrest during the second night of protests in March 2021 at Echo Park Lake. That night made up a quarter of arrests against journalists in the country in 2021 and was met with outcries about how the press was treated that night by local and national media groups. Many protesters and activists were also arrested that night, but that received less attention from mainstream media.

The city has since dropped all charges against the 180 people arrested on March 25, 2021, during the Echo Park Lake protests, including Jon and Kate, but the lawsuit intends to hold the City and LAPD accountable for their actions.

In the lawsuit, filed by Dan Stormer and Shaleen Shanbhag of Hadsell, Stormer, Resnick, & Dai in coordination with Susan Seager and Jack Learner of the UC Irvine School of Law, Jon and Kate allege the city violated their First Amendment and Fourth Amendment rights , along with causing physical and emotional harm during detention.

The LAPD’s official statement that night was that journalists and members of the media must disperse during unlawful assemblies. But the lawsuit alleges that by arresting journalists for failure to disperse, the City unlawfully prevented them from engaging in their First Amendment–protected activity. The lawsuit cites that the Ninth Circuit Court of Appeals established 30 years ago that filming and reporting about the police in public venues is a constitutionally protected activity. Jon and Kate’s arrest meant that they were unable to continue their work reporting on what happened that night.

The suit brings up the LAPD’s violation of its own policy regarding press passes. Earlier in the year, a memo was given throughout the department that said, “the inability [of reporters] to produce identification does not preclude an individual from acting as a member of the media.” When LAPD finally began to let the media out of the kettle, it was only those who possessed a press pass that were allowed out. As reported by Lexis-Olivier Ray of L.A. Tacothe LAPD only issued nine press passes in 2020, and the application portal was inoperable for much of 2021 due to “software issues.”

Both Jon and Kate lacked a press pass and they, along with other journalists who were unable to present one, were detained and arrested. Both Jon and Kate self-identified themselves as press, which per LAPD policy would have been sufficient cause to let them go, but they were still arrested and held for four hours.

The suit also alleges bodily harm to Jon, who experienced hand numbness and shoulder pain while being detained in flex cuffs. LAPD’s arrest sent Jon to urgent care for the swelling and numbness from being held in flex cuffs. The doctor on duty said that the pain in Jon’s swollen hands and wrists were the result of a pinched nerve. Jon continued to suffer hand numbness for three to four months after his arrest of him.

This is not the first time LAPD and the City have been sued for violating press freedoms. Several previous lawsuits came with reform and training as consequences, but the lawsuit alleges not enough has been done to curb the department’s rights-violating behavior. The lawsuit states that “the current unlawful crowd control, media relations, and use-of-force policies and the long-standing customs and practices of the Defendants do not meet constitutional requirements.” This lawsuit hopes to require the department to continue and abide by its First Amendment training, along with injunctions against the ongoing behavior of the department.

“I believe the LAPD planned to make arrests that night, and also knew there were journalists at the park, and when they were kettling,” says Jon about LAPD’s intent that night. Jon’s experience seems to align with a video recorded by an Echo Park resident the morning of the mass arrests. That video was reported by Kate Cagle, who was also detained and released that night.

The mass arrests at Echo Park Lake helped spur changes in press freedoms with the passing of SB98, which allows the press and media to stay during unlawful assemblies and riots. This law allows journalists to continue to do their jobs without the fear of being arrested or detained, and its goal is to add another layer of protection while covering the news. It still remains unknown how LAPD will comply with that law in practice.

Both Jon and Kate hope that the lawsuit will hold the city accountable for their actions that night and help further protect press freedoms in LA. Knock LA stands behind its journalists and will continue to support them during this process.