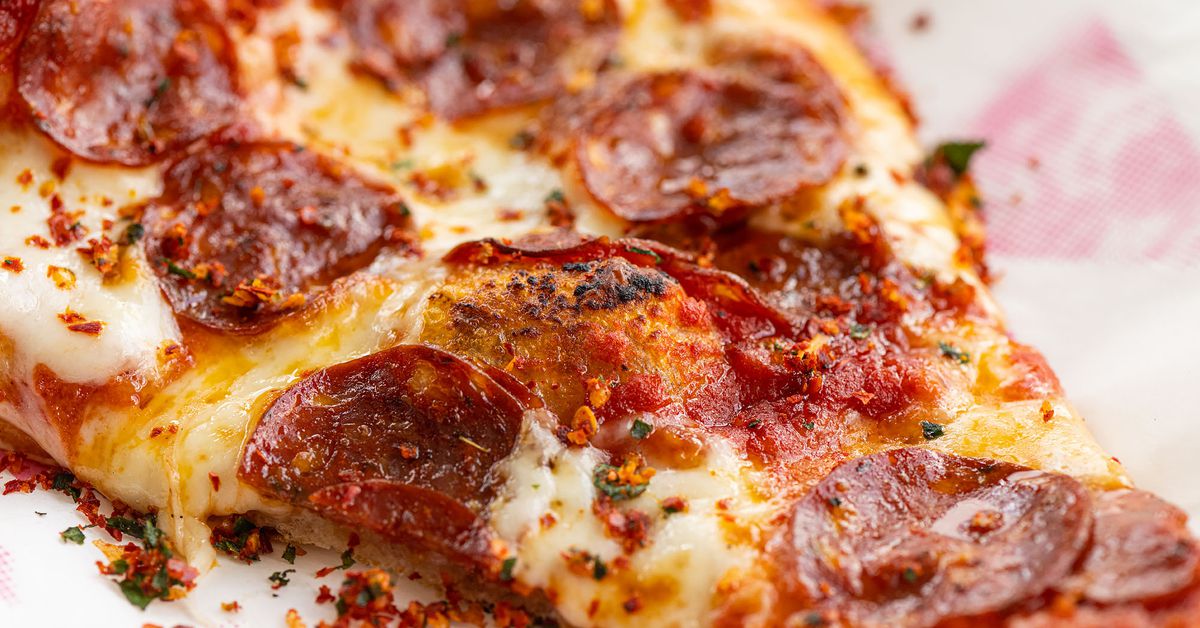 Chef Bradford Kent didn’t see beyond his own ambitions when he initially applied to become a tenant of the 1,300-square-foot space at Oxy Arts, a commercial building in Highland Park owned by Occidental College dedicated to community-based arts programming. But the college’s extensive application process to find restaurant tenants that met its rigorous community investment standards, which were set in place to combat the gentrification of the area, sparked a shift in his thinking about what it meant to run a restaurant dedicated to serving its community .

When Bagel+Slice opens this Thursday, May 12, serving good food is just the start. The restaurant is committed to social, environmental, and financial sustainability — an ambitious triple-bottom-line approach that Kent hopes to prove over time and replicate internationally through partnerships with universities.

Given Kent’s success as the chef-owner of Neapolitan pizzeria Olio inside Downtown’s Grand Central Market and his role as the co-founder and chief culinary officer of the national chain Blaze Pizza, critics can easily poke holes in his idealism. But Kent isn’t some millionaire a pursuing risky passion project because he can stomach a loss — he’s got skin in the game. “I didn’t do as well with Blaze as people would think. Yes, I’m a co-founder, but I’m not the major shareholder of this company. And no, I did not get independently wealthy,” he says. “I have Olio Downtown, I have this new restaurant, and I have my house — that’s all that I got. It’s all on the table.”

Kent’s educational background in business and marketing, food science, and culinary arts, along with his working knowledge of food systems and restaurant supply chains, makes him uniquely qualified to build and grow an environmentally conscious and community-minded business. Sourcing sustainable ingredients has been a critical step in updating his vision of it; ingredients are vetted to validate labels like fair-trade and organic. When considering which vendors and suppliers to purchase from, Kent applies some of the same standards and metrics that Occidental College uses to assess everything from farming land and soil practices to workers’ rights, says Amy Munoz, associate vice president for hospitality services at Occidental College .

While most restaurants have one or two suppliers, Kent’s commitment to only sourcing ingredients that meet this high standard means that he has over 20 different purveyors. But Kent recognizes that his approach is not infallible. When sourcing mistakes inevitably occur, he says he’ll take the necessary steps to remedy the situation immediately.

Though Occidental College is not subsidizing the business in any way (the space is priced at market rate), Kent is working with staff and students to assist with several of Bagel+Slice’s green initiatives. Kaye Jenkins, who graduated last spring and was a member of Occidental’s Food Systems Working Group, connected Kent to the dining hall’s sustainability initiatives to lower the restaurant’s costs on essentials like packaging. “The larger purchasing body you have, the easier it is to do sustainability more affordably,” she tells Eater. “It was awesome to have Brad come in and eager to reflect the values ​​of the community investment standards, trying to fight gentrification in Highland Park where we can, and then also the environmental standards [by generating] as little waste as possible.”

Kent is leaning on the college to compost the restaurant’s pre-consumer food waste. “Whether that’s wilted lettuce or carrot tops, those kinds of things that are a byproduct before the food is served will make their way to the campus garden and be processed,” says Isa Merel, a current Occidental College student and member of the Food Systems WorkingGroup. “The goal would be to produce enough compost that we can give it away to community members, as well as students and faculty at the college.”

To further decrease Bagel+Slice’s environmental footprint, Kent invested in an on-site ozone system to disinfect and sanitize the restaurant, thus eliminating the use of harsh chemicals and plastic gloves. Additionally, ozonated water reduces the amount of pesticides found on produce, helping to increase the overall health and safety of employees and customers.

Bagel+Slice’s energy efficiency will be optimized as well, hopefully with know-how from Occidental College staff and students once the restaurant is up and running. With the exception of the gas-run kettle used to boil bagels, all of the restaurant’s appliances use electricity. “I want to see if we can actually determine carbon neutrality or not, or carbon negative. How impactful are we? And how can we get better? We actually put students on assignments to study this stuff,” Kent says.

When it comes to the restaurant’s employees, Kent is committed to hiring from northeast Los Angeles communities and paying higher than market wages. Every staff member starts at $18 an hour and all tips will be pooled and evenly divided among back and front of house. Kent is determining the feasibility of providing health insurance, paid time off, on-demand pay (that allows employees to receive their wages as they earn them), and 401(k) retirement plans. “You can’t work into your 70s because you didn’t save up,” says Kent. “I don’t want people to be working as hard as I am right now when they’re my age. I didn’t have as much guidance as I can offer people now.”

Given the significant costs of well-sourced ingredients, above-market wages, and comprehensive benefits, Kent is making the numbers work by capping his profits at 15 percent, which is 5 to 10 percent below the industry’s average. “The commitment is to me and my family. We make less money. That’s it. Because that’s the only way it can work and that’s the future for all levels, all scales of restaurants,” Kent says. The financial viability of Bagel+Slice is also dependent on meeting projected sales volumes that include 1,000 bagels and 200 pizzas each day. Kent is willing to streamline the menu to increase efficiency if the restaurant falls short of meeting its milestones, but he’s adamant about not increasing menu prices, paying workers less, or sourcing ingredients that fall below his standard.

Like many neighborhoods throughout the Southland, Highland Park is experiencing social and economic changes that have led to tremendous shifts in demographics, increased commercial development, and the displacement of longtime residents and businesses. Kent recognizes the dynamics of gentrification at play outside Bagel+Slice’s door. “I don’t want to just serve privileged people who bought houses for over a million dollars. I also want to make sure that the people who spent $30,000 on their house 40 years ago are also served,” he says.

The restaurant’s core menu of bagels and pizzas makes it possible for most to fill up for $5 or less. Kent’s hand-rolled, kettle-boiled, and plank-baked organic bagels are available every day for $2.85 and made using the exacting criteria set by the New York City bagel bakers union (Local 338) in the early 1900s. There are gluten-free bagels as well, though the facility is not gluten-free. His strict adherence to traditional bagel-making standards ignited an online standoff of sorts between Kent and neighboring bagel slinger Belle’s Bagels last December when a Mashed article originally titled “Brad Kent Explains How To Tell If You’re Eating A True Bagel” misquoted him. Kent and Belle’s have since called a truth.

Kent will continually assess every element of the restaurant — from its playlist to menu language — to ensure its inclusivity and accessibility. If everything works out the way he envisions, Bagel+Slice will be a working model for educating, testing, and providing sustainable and equitable systems in a restaurant setting. “Baking beautiful bagels, making beautiful pizzas, doing things that are sexy on Instagram to get people’s attention, that’s fantastic. Good for you. I wish you all the success in the world, but you’re not making a difference,” Kent says. “How do we help others? That’s what I want to do.”