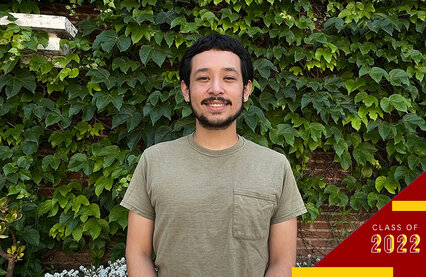 Carlos Navarro never dreamed he’d become an entrepreneur. But as the 27-year-old doctoral candidate prepares to receive his PhD in chemistry from the USC Dornsife College of Letters, Arts and Sciences, he also readies himself for the next stage in his life — leading a new company.

Navarro, who will participate in USC Dornsife’s PhD Hooding Ceremony on May 11, is co-founder of Closed Composites, an award-winning venture centered on extracting carbon fiber materials from old aircraft parts. The recovered material, lightweight and sturdy, can be reused in other products, such as tennis rackets, golf clubs and bicycles.

Carbon Composites could provide an environmentally sustainable method of recycling carbon fiber — and a principled career path for Navarro.

Navarro grew up in San Bernardino, California. His father, Carlos Sr., and his mother, Maribel, each immigrated from Mexico when they were children. They met in high school and then married and started a family soon after.

To supplement their income, Carlos Sr. and Maribel landscaped on weekends, often enlisting the help of their two sons. This went on for almost 20 years, until Carlos Sr. died of stomach cancer in 2020.

Though he now looks back on that time with fondness, Navarro says he didn’t care much for the work at the time.

“We would drive out to Redlands, which is maybe 15 minutes away, with all the rakes and the lawn mower and the weeder and everything. At the time, I hated it. It’s like, ‘Oh, it’s Saturday morning, you know, I want to watch my cartoons,’” ​​he says with a laugh.

The IB chemistry program at Cajon worked with nearby California State University, San Bernardino (CSUSB), to let the high school students use the university’s chemistry labs once a week.

“It’s super cool in high school to see the chemistry lab within a university setting and what it’s like to do chemistry on that scale,” Navarro says. “So from high school, I kind of latched on to that experience and really sunk my teeth into it. I’m still biting at it to this day.”

The program also helped Navarro transition to CSUSB after high school, where he earned a bachelor’s degree in chemistry.

Chemistry with a sustainability angle

As he drew closer to graduating and began contemplating PhD programs, Navarro held onto a desire to contribute to a greater good with his studies and career path.

“I always had the intention of pursuing my PhD with the idea of ​​sustainability or doing something environmental with it,” he says.

When he visited USC Dornsife as an applicant, he met Professor of Chemistry Travis Williams, whose work fit Navarro’s preferences.

“He’s got so many interesting ideas, and his work was within the sort of space I was interested in, either renewables or recycling or anything with that kind of sustainability spin,” Navarro says.

That research focus, plus Williams’ genuine interest in Navarro — “he was really kind and reached out to me afterwards and kept in contact,” says Navarro — convinced the young chemist to join Williams’ lab at USC Dornsife.

Williams soon put Navarro on a project aimed at finding a way to efficiently extract carbon fiber from discarded aircraft components. Carbon fiber composite material in aircraft parts is piling up on Earth, and current recycling methods are inefficient and environmentally unsound. Williams’ was looking for a more efficient, sustainable way to produce high-quality material for reuse.

“When I joined, Travis had this idea in his head already of trying to do chemistry to work on this. When I first came, I was like, ‘Oh, yeah, let’s go, let’s do this. This is totally up my alley.’ And from there, it kind of took off,” Navarro says.

Finding funding — and a voice

As he sought financial support for the project, Williams asked Navarro to accompany him to a Technology Advancement Grants presentation, where Williams pitched the project to the USC Stevens Center for Innovation in 2018. Williams won a grant, and Navarro came away with a new understanding of the importance of effectively communicating science.

“I saw him weave this story, you know, and share chemistry with folks that are otherwise very outside of that circle,” says Navarro. “He was able to effectively communicate the ideas, the potential and the value, and get people excited about it.”

Williams was successful, bringing early funding to the carbon fiber research, and soon after he encouraged Navarro to try his own hand at pitching the project through the Wrigley Sustainability Prize at USC Dornsife, a yearly competition that supports innovative environmental ideas with market potential from within the USC community.

“That pitch contest was really cool because they had a lot of hands-on workshopping for a pitch deck and for being able to tell a good story and communicate effectively,” says Navarro.

He and Katelyn Michael, an undergraduate researcher in Williams’ lab, worked together to present the idea of ​​a company — Closed Composite — that recycles aircraft carbon fiber. They took first place.

Not long after, Navarro received an email inviting him to enter the ASU Innovation Open pitch competition at Arizona State University, which focuses on world-changing hard tech ventures started by university students. The organizers had caught wind of Navarro’s Wrigley Prize win.

“That pitch event wasn’t on my radar, so them reaching out to us was really exciting,” Navarro says. And fortuitously; Navarro was successful, winning the Breakthrough Energy Ventures Prize and netting $100,000 to invest in the company.

Explore opportunities — and maybe save the planet

Despite some early hesitancy about leading a company, Navarro seems more comfortable — and even excited — about the idea, and eager to learn more. After he receives his PhD, he will depart for Boston to undertake a fellowship with Activate, a nonprofit that helps scientists with environmentally responsible projects like Closed Composites further their ventures.

“I was so scared initially by the idea of ​​running a business,” he says, citing his concerns about recent claims by some corporations that they use environmentally friendly practices when in fact they might not be so sustainable.

His goal in the coming years is to help change that, building on his work ethic and the experiences he’s had helping to build Closed Composites during his time at USC Dornsife to create a company that offers a real solution to an environmental problem.

And as he reflects on the path he’s taken, he offers advice to those coming up behind him.

“I didn’t think I’d be a CEO and handling business stuff, but it’s worth taking these opportunities to try to do new things. It’s a great time, honestly, to just grow in as many different facets as you can and do as many cool things as you can.”

And if you can save the planet while you’re at it, all the better.