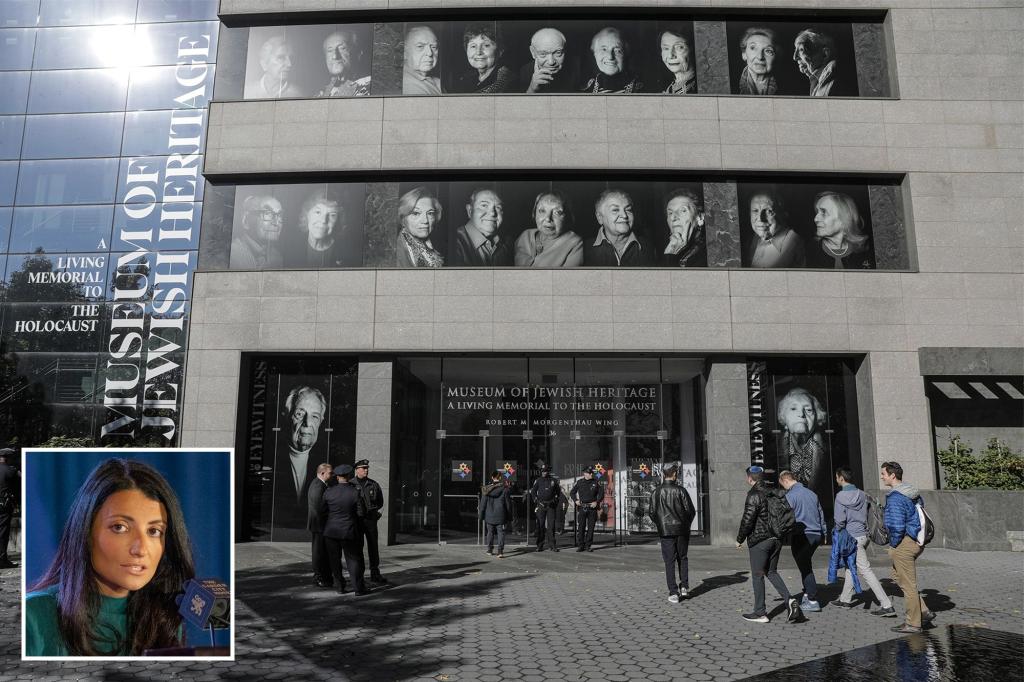 A local lawmaker announced Sunday she is yanking $5,000 in previously planned funding for a Manhattan museum after it allegedly barred Florida Gov. Ron DeSantis from speaking there in June.

Councilwoman Inna Vernikov — a Ukrainian-born American Jew — revealed in an open letter to museum donors that she will no longer give the money to the Museum of Jewish Heritage. The dough is part of the $700,000 in city funds she is allotted to dole out to Big Apple organizations in the 2023 fiscal year.

“I was happy to contribute some of my discretionary funding to The Museum of Jewish Heritage for the great work they do,” Vernikov (R-Southern Brooklyn) wrote in a letter dated Sunday. “I am now pulling that funding and I am asking you to do the same.

“This move should send a strong message to the leadership of the museum: DO NOT politicize the Holocaust!” added Vernikov, one of five GOP city lawmakers. “Just teach it.”

The move came after the leaders of the philanthropic Tikvah Fund — Elliott Abrams, the deputy national security adviser under President George W. Bush, and executive director Eric Cohen — told The Post that museum brass advised them to either disinvite DeSantis from the organization’s annual Jewish Leadership Conference at the Battery Park City venue or relocate the event.

Cohen previously told The Post that organization leaders were shocked by the ultimatum and opted to move the event to Pier 60.

In response, the Museum of Jewish Heritage denied that it had opted not to rent its space to the Tikvah Fund’s event if DeSantis appeared.

“No one was banned or canceled,” the museum wrote on Twitter. “The fact is that no contract with the Tikvah Fund was ever signed for this rental event to be held at the Museum and no deposit was ever made.

“This is not a free speech or censorship issue,” the institution added. “This was simply a contractual and logistical decision.”

In her one-page letter, Vernikov said she “would’ve never imagined… in my wildest dreams” removing “funding from a museum that educates the world about the atrocities of the Holocaust.

“As a staunchly pro-Israel, Ukrainian-born American Jew who devotes much time to fighting anti-Semitism, it greatly saddens me to see this museum’s leadership act so cowardly,” she fumed.

The Museum of Jewish Heritage had no immediate comment on the letter.

Titled “Jews, Israel, and the Future of the West,” the Tikvah conference is also slated to host former Secretary of State Mike Pompeo, former Israeli ambassador to the United States Ron Dermer and former New York Times writer Bari Weiss, according to the website.

DeSantis’ speech is titled “The Florida Model — And Why it’s Good for the Jews,” the site states.

The Florida Republican — who became the Sunshine State’s chief executive in 2019 after serving in Congress for six years — has recently become a high-profile, controversial national figure.

DeSantis has been thrust into the limelight by his support for the so-called “Don’t Say Gay” bill that bans the discussion of gender identity and sexual orientation for kids in kindergarten through third grade and by ending the Walt Disney Company’s longstanding special tax status with the state after it publicly ripped the education law.