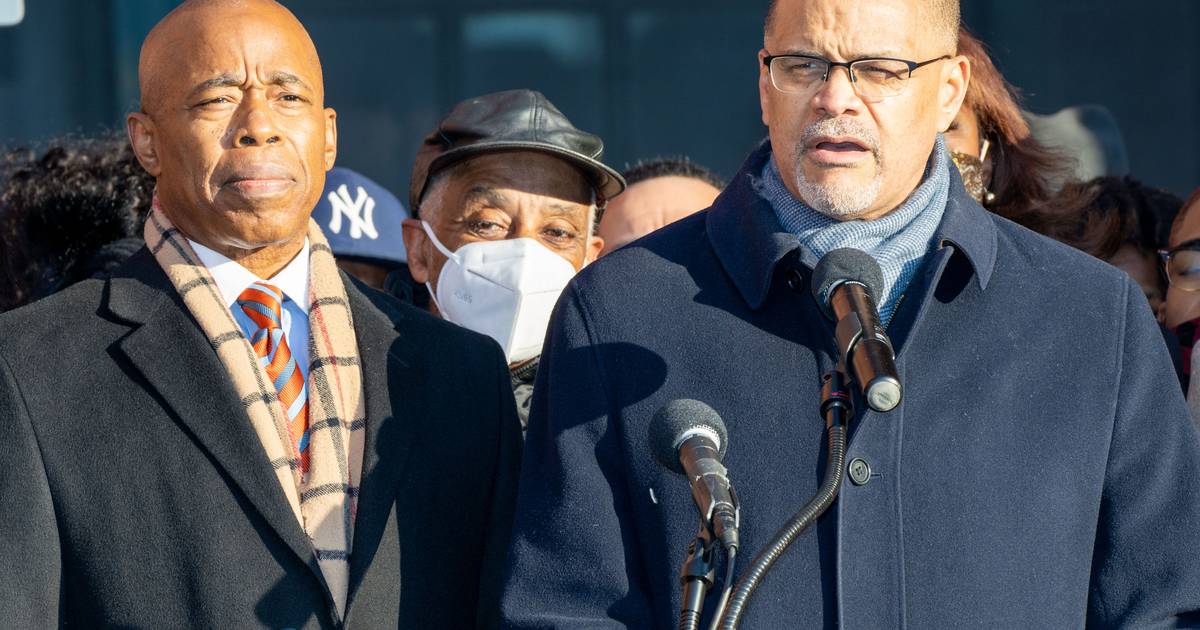 Mayor Adams rallied with union leaders Monday morning to highlight his push to renew mayoral control of the city’s schools — but with one glaring absence.

The United Federation of Teachers, which represents the city’s public school teachers, did not attend the mayor’s outdoor confab on the steps of City Hall, and when asked about their absence, Adams punctuated as to why.

Adams said he dined with UFT President Michael Mulgrew over the weekend, but did not reveal what they discussed.

“You have to ask them about mayoral control specifically,” the mayor told reporters. “One thing’s for sure, everyone agrees — the more clarity that we have, the better we’re going to be able to resolve the problems in our school system.”

Since taking office, Adams has been pushing for Albany lawmakers to give him an extension of mayoral control of city schools, a power which was granted to both Mayors Michael Bloomberg and Bill de Blasio before him. On Monday, Adams re-upped his push, arguing that, unlike his two predecessors, he and his Schools Chancellor David Banks are products of the city’s public school system.

“We shouldn’t even have to be here today to have this conversation,” Banks said. “The reality is that the greatest and I are both products of this system, and we’ve dedicated our lives and our careers to the fabric of New York City.”

Along with the notable absence of the UFT, the Council of School Supervisors & Administrator, which represents school principals and other supervisors, also did not attend Hizzoner’s rally, which was initially scheduled for last Thursday, but postponed after Adams’ return flight from Los Angeles was delayed.

Both the UFT and CSA have voiced support for the continuance of mayoral control of schools, but the unions also want to see more in the way of guardrails.

A UFT spokeswoman said Monday that “while we support greater control, we have also repeatedly called for more checks and balances and greater parental voice.”

During a January hearing on mayoral control in Albany, Mulgrew called on the state legislature to change the structure of the oversight panel that approves city Education Department contracts by adding two parent-elected members and guaranteeing that members can’t be yanked from their positions for voting against the wishes of the official who appointed them.

Mark Cannizzaro, the head of the city principals’ union, agreed that the education oversight panel should be restructured to give it more power to push back on the Department of Education and the mayor. He has suggested taking away two mayoral appointees to remove the mayor’s majority and launching an independent review of two decades of mayoral control.

The role of the normally-obscure panel has grabbed the spotlight in recent weeks as Adams has struggled to appoint and maintain members, and the panel has bucked the DOE on several important budget proposals.

The UFT is by far the DOE’s largest union, representing roughly 120,000 of the DOE’s 150,000 employees. CSA represents roughly 6,000 principals, assistant principals and administrators.

Adams said on Monday that we would travel to Albany to summarize his push for mayoral control in the coming weeks. When asked if he had an alternative plan in the event that he fails to secure mayoral control, Adams essentially said no.

“Sometimes when you create a Plan B, C, D and E, you are setting yourself up for failure. And we’re not. We have one plan, Plan A. Plan A is mayoral accountability,” he said. “We believe the people understand how important it is, and that is our focus.”