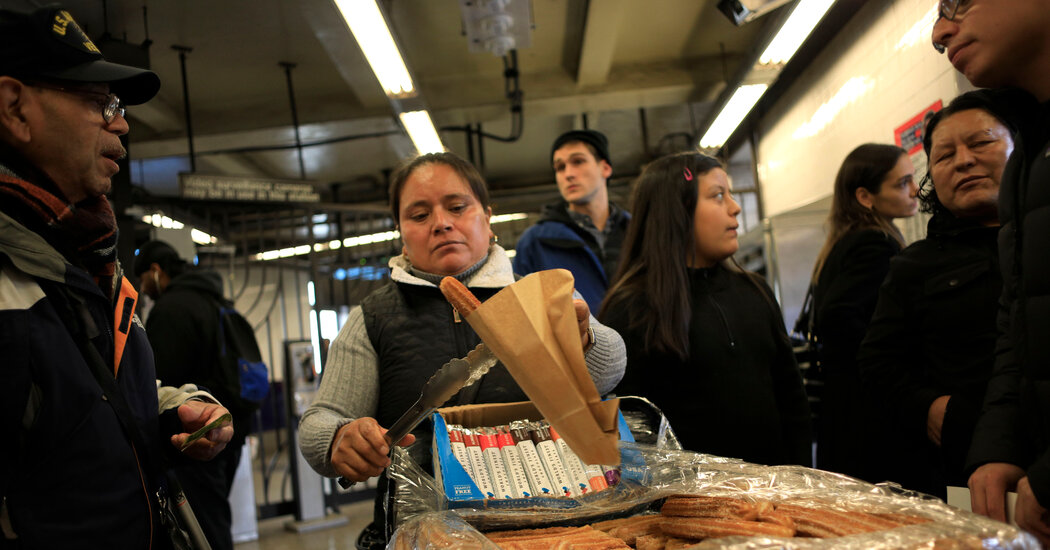 Mayor Eric Adams on Monday defended police officers who last month handcuffed a woman accused of selling fruit without a license in a Brooklyn subway station, saying mango sales could pave the way for bigger problems.

When asked by reporters about the incident — which was captured on video and later led to an outcry on social media — Mr. Adams said that New Yorkers must “follow rules” when selling food in the subways, and that the Police Department should enforce them.

The remarks from Mr. Adams, who said he was concerned about commuters getting ill from food sold without a permit, came as he continued to champion the enforcement of so-called quality-of-life matters — an approach to policing that critics say targets vulnerable people and does little to improve public safety. The incident followed several high-visibility arrests of vendors in recent years that have drawn attention and outrage.

María Falcon, the Brooklyn woman who was led in handcuffs from the train platform at the Broadway Junction station on April 29, had a tray of fresh melon, kiwis and mangoes propped on a laundry cart when she was stopped. She underwent a routine search before she was issued a summons and was later released. She had also been issued similar summons on April 5, a Police Department spokesman said.

The police have worked alongside the city’s Parks Department and the Department of Consumer and Worker Protection around Broadway Junction in recent weeks following complaints from a Metropolitan Transportation Authority station manager there about unlicensed food vendors.

Ms. Falcon, who also sells churros and chocolate, was first issued a mobile food vendor license in 2009 but has not been able to get a permit to operate her cart, said Carina Kaufman-Gutierrez, deputy director of the Street Vendor Project at the Urban Justice Center. The city has for years capped the number of mobile food vending permits at 2,900 — barring Ms. Falcon from obtaining the document she needs to sell her fruit on the streets.

“Everybody operating without one of these permits is sadly considered a criminal and being treated as one by the NYPD and by the other agencies,” said Mohamed Attia, managing director of the Street Vendor Project.

“Every single vendor we work with will do whatever it takes to get a permit from the city and operate in a legal way,” he added. “They are feeling they are risking their freedom every minute that they are out in the street trying to make a living.”

The incident echoed the 2019 arrest of Elsa Morochoduchi, an immigrant from Ecuador who was selling churros without a permit in a subway station. Police officers handcuffed her, confiscated her cart and gave her a summons. Last year, sanitation workers in the Bronx tossed whole watermelons and boxes of produce belonging to another woman who sold fruit on the street and also was selling without a permit.

Some city officials have criticized enforcing such policies. Adrienne Adams, speaker of the City Council, said on Twitter on Monday that New Yorkers who are trying to make a living should not be pushed into the justice system. “Street vendors like Maria deserve to work with dignity and respect,” she said.

And Brad Lander, the New York City comptroller, said on Twitter that “handcuffing Maria in front of her daughter for selling fruit does nothing to make our city safer.”

Selling food, performing music or otherwise drawing crowds on platforms can pose a hazard for riders and MTA workers who might be pushed too close to moving trains, said Aaron Donovan, an MTA spokesman.

“The MTA recognizes the benefits that vending can provide, but there are also safety-oriented rules about vending on platforms,” Mr. Donovan said. “While there are a wide range of opinions about which rules to prioritize, the MTA appreciates that the NYPD is working across the board to protect subway riders.”